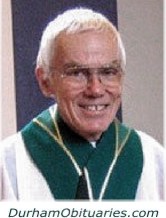 FERGUSON, The Reverend Canon Alan John Halliday  - Passed away peacefully to join the Saints on November 1, 2017 at Shepherd Lodge at the age of 85.

Alan led a full and rewarding life, but was challenged by Alzheimer's Disease in his last four years.

Born on October 6, 1932 in Toronto to May and John Ferguson, brother to the late Rev. David Ferguson (Sheila) and Jean (Bob McGinley).

Brother-in-law to the late Peggy Profit (Keith) and the late Ted Davis (Michelle) and loving uncle to many nieces and nephews.

A much-loved parish Priest, Alan was ordained in 1962 and served in parishes in Saskatchewan, northern Manitoba, Toronto and Aurora until his 2nd retirement at age 75.

If desired, memorial donations may be made to the Alzheimer Society of Canada, The Primate's World Relief and Development Fund or a charity of your choice.