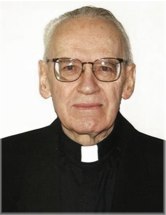 He was in his 94th year and 75th in Religious Life.

After his Jesuit training and following Ordination in 1955, he began his lifelong Apostolate.

For the next 56 years, he was totally involved in promoting devotion to the Sacred Heart of Jesus.

In memory of Father Power, donations may be made to the Jesuit Development Office, 43 Queen's Park Crescent East, Toronto, ON M5S 2C3.