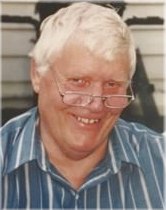 Also survived by his sister Christine and her husband John.

Donations to the Diabetes Association or a charity of your choice would be appreciated.