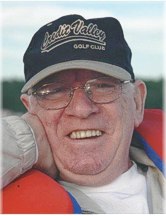 Passed away Friday, April 20, 2018 after a courageous battle with melanoma at Credit Valley Hospital in Mississauga, Ontario at the age of 86.

Loving father to Donna and her husband Brad and David and his wife Anna.

Born in 1931 in Arthur, Ontario, Jack was a graduate of De Le Salle High School in Toronto, Queen's University and The Institute of Chartered Accountants where he became a life-long practicing Chartered Accountant. Retired as Vice President of Finance at Industrial Tires Limited (I.T.L.) and Urethane Products of Canada.

Retirement was filled with his passions: friends, family, travel and golfing at the Credit Valley Golf and Country Club where he was in his 39th year as a member.

Special thanks go out to the doctors and nurses at Credit Valley Hospital Oncology and Palliative care units who so lovingly cared for Jack.

In lieu of flowers, the family requests that donations be made to the Melanoma Network of Canada (www.melanomanetwork.ca) in Jack's name.

Friends and family will gather at the Turner and Porter Funeral Chapel (Erin Mills) on Friday, April 27th from 6-9 p.m. A mass will be held at St. Ignatius Loyola Roman Catholic Church on Saturday, April 28th at 10:30 a.m. followed by a private interment.

Details of a Saturday reception for close friends and family to be announced following the church service.