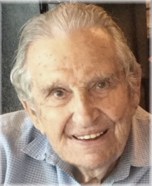 Passed away peacefully on Father's Day.

Forever in the hearts of Kileen, Ray and Mary.

Lovingly remembered by sister Kath, grandchildren Lucas, Patrick, Dano, Michael, Moragh, Jesse and Carolyn and their partners, great-grandchildren Boston and Adelyn, daughter-in-law Sue, sons-in-law Mike (deceased) and Reg and the many people whose lives he touched and changed.

The world will be a sadder place without his constant singing, his jokes and stories and his gentle spirit.

A Memorial Service will be held on Friday, June 29th at 1:30 p.m. in the Funeral Home Chapel.

In lieu of flowers, donations to the Alzheimer's Society would be appreciated.