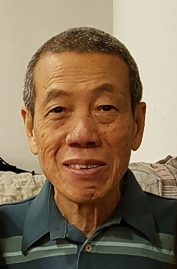 TRUONG, Cuong - Our beloved father Cuong Truong passed away at Bridgepoint Active Healthcare on Sunday, July 25, 2021 at the age of 75 with his family by his side in Toronto, Ontario.

It is with great sadness that we announce the passing of our loving father, Cuong Truong, after an almost 4-year battle with Lung Cancer that had spread to his brain and bones.

It has been a long journey and we are grateful to have been able to stand by him throughout his illness and be there to help him along the way.

Thank you to the doctors, nurses, and medical staff at St. Michaels Hospital, Mount Sinai Hospital, Princess Margaret Hospital, Toronto General Hospital, and Bridgepoint Active Healthcare for all of their work and dedication in the care of our father.

In 1979, he left Vietnam with our mom and Ben in an attempt to give his family a better life and an opportunity to live freely. They landed in Indonesia and was accepted into a refugee camp on Kuku Island. There, Ai Linh was born and our family was soon after accepted by Canada in 1980. Our family immigrated to Kitchener, Ontario where we were sponsored by the Stanley Park Baptist Church. We were very fortunate to have many families help us assimilate in a new country, mainly the Badham Family, Wigg Family, Martin Family, Vincent Family, Green Family, and the Spencer Family. David was born in Kitchener, the first Canadian born in our family. A few years later, our family moved to Toronto in dreams of the big city, where we still reside.

Our father was a very humble and simple man who lived a simple life. Very private and enjoyed staying in to tinker with his hobbies. He loved the challenge of finding old electronics and fixing it up to make it work, which he normally would. You name it – he could fix it. His main passions were computers, cars, cooking, and cameras. He was always the one behind the camera and rarely in front of it. He had a very silly personality that not many people knew about. He liked to dance, sing sporadically, and make jokes just to make our mom laugh, especially if he knew he was in trouble!

He spent his entire working career in the car industry, doing auto body work and mechanics later on. He was able to support his family with this career and we are extremely grateful for that.

Our family has decided not to have a service for our father. This was his preference and we have decided to honour that for him. Our family would like to thank everyone who sent us flowers, words of condolences, and gifts of condolences. We are extremely thankful for all of it.