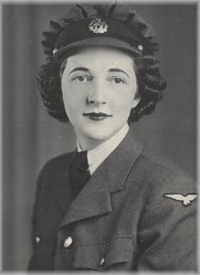 MacKINNON, Dorothy Elizabeth (nee SHACKLETON)   - Passed away peacefully, in her 99th year, on Tuesday, October 12, 2021, while in palliative care at Etobicoke General Hospital with family in attendance.

Born in Guelph, Ontario, as the second oldest of six children she will be remembered by all who knew and loved her as someone whose passion for life was evident in everything she did.

Dorothy served her country proudly as an airwoman with the RCAF during World War II and, after the war, went on to a distinguished career in banking which included being written up in the Financial Times.

As well, she became a licensed Realtor, established and taught her own ceramics group for 17 years, and was recognized as an extremely talented porcelain artist in her own right.

She and her beloved husband Rawl MacKinnon were avid golfers with a shared enthusiasm for travel which they indulged until Rawl's death in 1999.

After his passing Dorothy travelled less but continued to be an active and loving sister, mother, aunt, grandmother, and great-grandmother.

She will be deeply mourned by her daughters, Pamela Mac Donald and Wendy Barrett and son-in-law Harry Barrett, as well as by her dear sister Kathleen and brother-in-law Ron Dabor and her dear brother David Shackleton and sister-in-law Dorothy.

In addition, she will be sadly missed by her niece, nephews, grandchildren, great-grandchildren and friends. Dorothy was predeceased by her mother and father, Norman and Elizabeth Shackleton (nee Ames), sister Audrey and husband Jim Davidson, brother Clayton Shackleton, brother Norman Shackleton and wife Ella, and brother-in-law Dr. Robert MacDonald.

As per Dorothy's wishes, cremation has taken place.

Family and friends will be advised of the date and place for 'The Celebration of Life" to honour her passing.

"My candle burns at both ends; it will not last the night but ah, my foes, and oh, my friends - it gives a lovely light!" - Edna St. Vincent Millay.