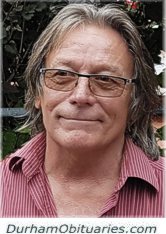 Regretfully, we announce the passing of Randy Hazlett on August 7, 2018, in his 65th year.

A lifelong musician and writer, Randy always found ways to indulge his creativity even when his professional life took him in other directions.

Known for his humour, he enjoyed imparting small smiles and chuckles to all even during sad times like these.

Randy was born to the late Gorden and Lorraine Hazlett in East York, where he resided for much of his life.

A father to Luke (Heather) and Lindsey with their mother Michele, who despite their later separation never stopped loving each other.

A little brother to Gord(Sandy) and the late Dan and Bill, but big brother to Jennifer(Barrie).

Cherished friend to Sophie’s and Remarks crowd. Much like his longtime band’s namesake, Freewave, our memories of Randy will go on even if the initial force behind them has ceased to exist.

Expressions of condolence may be place at e.touch.ca.