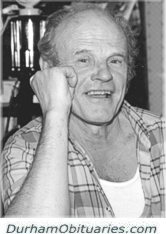 TURUDIC, (Turudić) Mato  -  of Cannington Ontario, formerly from Oshawa and Whitby, lost a protracted and noble battle against a sudden illness, passing away in his 97th year on Friday, August 24, 2018.

Loss of his indomitable presence will leave an emptiness in all of those he touched, and he will be dearly missed.

Mato was preceded in death by his beloved wife Mira in 1997, and is survived by son Andy Turudic, son Walter Turudic and daughter-in-law Donna, and son Mato “Steve” Turudic Jr.

He will be greatly missed by his quadruplet grandchildren Ian, Edmund, Tristan, and Andraia and by their mother Luisa Turudic; by granddaughter Tamira and grandson Mathew, and by great granddaughter Raina.

Mato will be lovingly remembered by his many nieces and nephews, family, friends, and those that had the pleasure of knowing him. Pallbearers will be Andy Turudic, Mathew Turudic, Steve Turudic, and nephews Tony Čuvalo, Viktor Chuvalo, and Goran Penava.

Mato, one of seven siblings, was born in a small village near Čitluk (near Medjugorje), in what is now Bosnia-Herzegovina, to Croatian parents Andrija and Šima (Bulić) Turudić on May 12, 1922. Mato was a veteran of the Second World War and retired after 23 years of dedicated service at General Motors in Oshawa. He was an avid and accomplished hobbyist-farmer and entrepreneur.

Mato had gotten an early start in business as a pre-teen that took on sole responsibility for marketing his family’s tobacco crop, traveling by foot and accompanied by his donkey for over 20km to Mostar to do so, and is a distinguished graduate of the School of Hard Knocks.

Mato’s visitation will be held at DESTEFANO FUNERAL HOME, 1289 Keith Ross Drive, Oshawa (905) 440-3595 on Thursday, August 30 at 10:00am. His Funeral Service will be in the Chapel at 11:00am, after which interment will be at Resurrection Cemetery in Whitby.