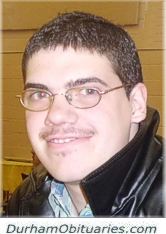 BLANCHARD, Cody Nicholas  - Passed away at the age of 27, on February 21, 2019 at Princess Margaret Hospital after a valiant battle with cancer.

Cody will also be dearly missed by Maria Ninni, Amanda Hall, Rosa Ninni and Dominic Ninni as well as by cousin Calen and by many other relatives.

He will be forever remembered by his extended family at Christian Horizons.

A special thank you to Janice Dewland for her great support.

The family wish to extend their heartfelt appreciation to the doctors, nurses and staff of 15B at Princess Margaret Hospital for care, compassion and professionalism shown to Cody and his family.

Donations will be gratefully accepted for Princess Margaret Hospital or to the Greater Durham Special Olympics.