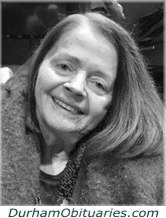 SHAUGHNESSY, Maureen Anne  - Passed away peacefully on April 21, 2018 at the Ottawa Civic Hospital surrounded by her children and sisters.

Predeceased by her partner Brian.

Daughter of the late Jack and Marie Shaughnessy.

Maureen was known best for her dry wit and cheekiness, whether it be at a Beatles or Rolling Stones concert in her teenage years or speeding down the halls in her wheelchair in her twilight years.

Maureen raised her four children on her own and it wasn’t unusual for her to work 2 to 3 jobs at a time to keep food on the table.

Despite this and other hardships in her life, Maureen always had a smile and a joke and kept her light shining as brightly as she was able. She will be sorely missed, and the world won’t be the same without her.

In lieu of flowers, please donate in Maureen’s honour to either CAMH or Bruyère foundations.