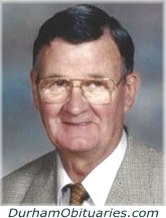 Bruce Macdonald, 90, passed on peacefully at Mount Hope Centre in London, Ontario on Tuesday, April 24, 2018, with his family at his side.

Born in Oshawa, Ontario to John & Agnes (née Snook), Bruce worked at General Motors for 40 years and had a passion for building houses, making furniture, and tending to his garden.

His family is heartened by the fact that Bruce has been reunited with his wife, Lydia, just in time to celebrate their 66th anniversary.

Preceded in death by his brothers John, Donald, and his sister Lois.

The family would like to extend a special thank you to Tilly Da Silva and the staff at Mount Hope for their amazing care and compassion.

A celebration of life will be held on Saturday, June 2nd at  THORNTON FUNERAL CENTRE, 1200 Thornton Road North, Oshawa, (South of Taunton Road and off of Dryden Blvd, 905-579-6787) at 12pm, with visitation one hour prior and a reception to follow.

Memorial donations can be made to ParkinsonCanada.