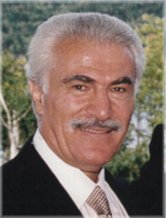 BILLOU, Napoleon - It is with great sadness that we announce the passing of an extraordinary man, Napoleon Billou on February 23, 2020 in Toronto.

Beloved husband of his loving wife of 53 years Maryam.

Adored father to his sons Nicky, Niels, and Nima (Kira).

Dear Uncle Napo to his nieces Nancy, Barbara, and Maryam, and nephew Scott.

He is predeceased by his parents, and his five siblings.

Napoleon was a genuine original, a larger-than-life man who lived fully and on his own terms.  He was a man of many varied interests and accomplishments. He started multiple successful businesses and had an uncanny ability to see around corners that others had a difficult time perceiving.  He was very proud that he employed dozens of people through his businesses and helped them provide for their families.

A published bestselling author and translator of books from English to Farsi, Napoleon was a voracious lifelong reader and learner. He earned advanced degrees in engineering and business, graduating at the top of his class in business.

Napoleon was an avid sportsman, and in his youth a championship swimmer. He had a deep passion for the martial arts, which he passed on to his children and grandchildren. He was awarded a black belt in both Karate and Aikido.

Napoleon was committed to his family having the best possible life. He had the courage and the foresight to bring his family to Canada in the early 80’s. As a result there is a flourishing Billou legacy in Canada, with the next generation thriving and being inspired by his example.

An unrelentingly loyal and generous friend, he will be inexpressibly missed by all whose lives he touched.

Funeral Mass will be held on Saturday February 29, 2020 at 11 am at Holy Trinity Armenian Church, 920 Progress Avenue, Scarborough. Burial will follow.