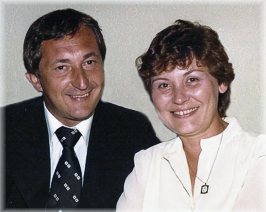 LASKOWSKY, Tony  - (Barrister and Solicitor) It is with shock and sadness that we announce the passing of Tony Laskowsky on Sunday, April 12th, 2009 at the age of 72.

Tony was born in Montreal and moved to Oshawa as a child where he attended South Simcoe Public School and then Central Collegiate.

He completed an undergraduate degree in Economics and received a Law Degree (BCL) from the University of New Brunswick.

It was during this time that he received a prestigious scholarship that allowed him to study at several prominent Law schools throughout Europe.

In 1964, he married his childhood sweetheart and love of his life, Joanne, to whom he remained happily married until his passing.  He began his law practice in Oshawa in 1964, where he continued to practice until the end.

Tony chose to use his incredible personality, intelligence, and considerable skill as a lawyer to help those around him.  Tony loved Oshawa, the Ukrainian Community and his many friends and clients, but especially his family.

There are many people who will miss Tony, but none more than his family.  Tony is survived by his wife, Joanne, his daughter Lesya and husband Jimmy, his son T.J. wife Leanne and their children, Nicholas and Katie.  He is also survived by his brother, Mike, brother and sister-in-law Jerry and Marty, and his nieces and nephews.

Tony always loved to tell or hear a good story or joke.  If you are one of the many people who he touched and would like to share a story, or leave a condolence, please go to http://tonylaskowskymemorial.blogspot.com.

Memorial donations to The Tony Laskowsky Memorial Scholarship Fund which can be made during the visitation or through Laskowsky & Laskowsky, Barristers and Solicitors, 73 Centre Street South, Oshawa, Ontario, L1H 4A1 (905) 579 0777 would be appreciated.