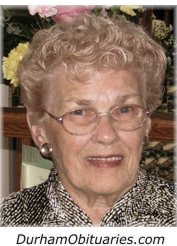 Hilda will be fondly remembered by all her family and friends.

Donations in memory of Hilda may be made to the Salvation army.