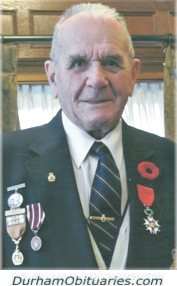 Hal passed away peacefully at age 95 at Sunnybrook Veterans Centre on February 11, 2020.

Hal was born in Coleman PEI , one of 5 children.

He left the island at 16 to work in a sawmill in the New Brunswick lumber woods.

At 18 he literally set sail aboard the HMCS Prince Rupert having joined the Royal Canadian Navy from April 1943 till Oct 1945.

During this time he completed 16 Atlantic crossings and took part escorting convoys in the English Channel during D-Day June 6 1944.

He proudly received the Legion of Honour medal in 2014.

After the war he settled in Ontario and worked as a carpentry foreman for the School Board and raising his family till his retirement.

Following retirement he enjoyed his cottage times, and travelling with his Legion buddies especially partying it up in Cuba for his 80 birthday!

He leaves behind his daughters, Donna (Dean), Patti, and Vicki. Predeceased by wife Alice and daughter Sheree.

Condolences may be offered at  mountpleasantgroup.com

In lieu of flowers donations to the 606 Pickering Legion or Sunnybrook Veterans Centre would be appreciated.