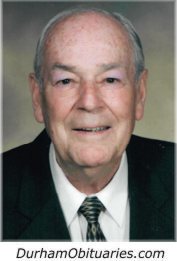 Peacefully at his residence with his family by his side on Wednesday, June 10th, 2020 at 91 years of age.

Predeceased by parents Robert Lack and Josie (Bell) of Oshawa and his 5 brothers Richard, Bernard, John, James and Joseph.

Harry will be fondly remembered by his extended family and many friends.

Harry was a lifelong resident of Oshawa; an employee of General Motors in Oshawa for more than 40 years; a faithful parishioner of St. Mary of the People Parish since its inception in 1957 and a Life Member of St. Gregory The Great Knights of Columbus Council #2671.

Due to the global pandemic, the Lack family invites you to watch the live stream of the service on Tuesday, June 16th at 10:30 a.m. on Facebook Live at the OSHAWA FUNERAL HOME Facebook page.

In lieu of flowers, memorial donations may be made to the  CHARITY of your choice.