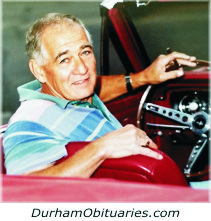 Barry was born and raised in Christiana, Jamaica on April 23, 1936.

Barry and his family immigrated to Canada in 1951. A year later, Barry began a 16 year career with GM of Canada in Oshawa.

In 1969, Barry made a life changing career move that completely altered the rest of his existence by beginning as a life insurance agent for Manulife. On April 27, 1974, he married Donna (Smith) with whom they shared their family of today that includes Kirk McNamee (Lorraine), Bret McNamee(Kellie ), Kevin McNamee (Mary) Tamara Webber(Jeff) and Bill McNamee. Of Donna, Barry was quoted in an industry publication of 2001 saying, “the one person that stuck with me through thick and thin is my wife Donna” and those words came to real fruition when Barry’s health deteriorated over his last years.

Together Barry and Donna established McNamee and Associates Financial Services Ltd: 1988, which is now owned by his son Kirk and a partner. Donna and Barry shared and enjoyed 9 grandchildren and 8 great grandchildren.

Barry was indeed a unique individual, his career achievements of becoming a member of million dollar round table, a Five Star Master Builder, C.L.U, made him a frequent speaker at many insurance industry events.

Barry’s passionate hobby was his love of Ford motor products especially mustangs. His skills to repair, maintain and drive these amazingly fast and challenging cars was witnessed by many.

At his final home in Oshawa, was included a large complete automotive shop and storage area for his special cars.

Another aspect of this ‘man for all seasons’ was his gift to be able to find, relocate and plant many species of foliage, particularly at his beloved Florida properties.

His passing at his home in Oshawa, with Donna and his long time care giver Mary Lou close by came after many years of medical difficulties and the family would like to thank everyone that was able to help.

Barry will be missed by all of those who met and marveled at this complex individual.

Condolences may be shared at etouch.ca.