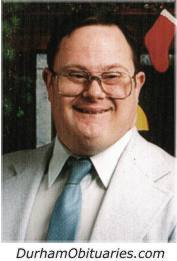 HAZLETT, Douglas Blaine - It is with great sadness that we share news of the passing of Doug Hazlett on Wednesday, October 14, 2020 at Glen Hill Strathaven in Bowmanville, in his 66th year.

Doug was a treasured son of the late Charles and Ruth Hazlett, beloved brother of Arlene McMaster, Peggy Koshowski, Ed Hazlett and the late Earl Hazlett and cherished uncle to the McMasters (Lesley, Kevin and Lloyd), the Yates (Debbie, Kathy, Brian and David) and the Hazletts (Pat and Steve), as well as many great-nieces and great-nephews.

While “Dougie’s” passions in life included hockey, wrestling, the Three Stooges, I Love Lucy and everything Elvis, family was most important to Doug.

He spent his early life in Hamilton surrounded by the love of his parents, siblings and their families.

If Elvis was the King, then the Queen was definitely his mum, Ruth, and he served as her close companion until her death in 1992.

That marked a tremendous life change for Doug, who bravely left behind everything he knew to be familiar to live in Oshawa with his sister, Arlene, her husband the late Ross McMaster, and the McMaster family.

His infectious laugh and playful disposition would serve him well as he embraced new friendships and opportunities, including the joy of first-time employment as a pizza box builder at Pizza Hut.

He loved and cherished his great-nieces Olivia and Emily helping to teach them to take their first steps.

Many thanks to those who touched Doug’s life during this period of self-discovery. A special acknowledgement to John Kane, who through his many years of dedicated service to Doug both as his support worker and close friend, greatly enhanced his quality of life while also providing caregiver respite to Arlene, Ross and Kevin.

The nursing team at Glen Hill Strathaven in Bowmanville also deserve recognition for their kindness and compassion in caring for Doug since 2015.

Born in an age when little was expected from someone with Down Syndrome, Doug lived a large life, full of fun and memorable moments and we will miss him.

Due to these challenging and unprecedented times, a celebration of Doug’s life will be held at a future date.

Donations in his memory to the Canadian Down Syndrome Society would be appreciated.

Online condolences may be shared at makfuneralhome.com .