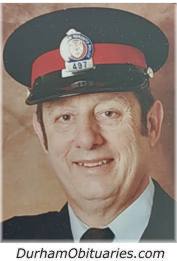 Predeceased by his brothers Peter and Clifford and his sister Ann Marie Jones (late Robert). Survived by his sisters-in-law Pauline and Doris.

In addition to being devoted to his family, Paul was an inspiration and an example to the many in the scouting organization during his involvement for over 40 years as a Scout leader.

An avid history buff, Paul was a member of a re-enactment group, the Incorporated Militia of Upper Canada, where he enjoyed bringing the early history of Canada to life. In 2005, Paul travelled to Belgium to take part in the re-enactment of the Battle of Waterloo.

Paul was most proud of being able to follow in his father’s footsteps to serve his community for 33 years as a police officer. It was as a Toronto police officer that he was able to have a positive influence in his community, from delivering a baby in his police car and advocating for kids in trouble, to helping a family at Christmas who were having a very difficult time.

Not one for seeking recognition for trying to help where he could, he was nominated and awarded the Ontario Medal of Citizenship.

His desire to help the community led him to join a rover crew as a senior member. It was a good fit for him. The crews motto, “Facta Non Verba” (Deeds not Words) and Paul’s philosophy, to do good things, were at the core of his values and that “by your deeds are ye known”.

Visitation at BARNES MEMORIAL FUNERAL HOME, 5295 Thickson Rd. N., Whitby on Tuesday October 27th, from 5:00 – 8:00 p.m.  Prayers will be offered in the Barnes Chapel Tuesday evening at 7:30 at the conclusion of visitation.

Mass of Christian Burial will be held at St. Mary of the People Catholic Church, 580 Marion Ave., Oshawa on Wednesday October 28th, at 11:00 a.m.

In lieu of flowers, memorial donations to the Hearth Place Cancer Support Centre are appreciated.