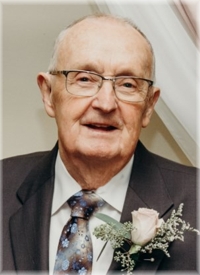 Following a full and joyous life filled with family, faith and music, Bill Whitsitt of Whitby, Ontario, passed away peacefully at his home on December 3, 2021.

Bill was predeceased by his loving wife Audrey, their son Zan (Janet) and his granddaughter Kimberly.

In the spring of 1926, before Bill was born Thomas immigrated to Canada to work in Northern Manitoba and Ontario, chopping wood in order to earn enough money to bring his wife and newborn son to Canada.

In 1929, Bill migrated to Canada with his mother, eventually settling in Oshawa at the tender age of 3.

Thomas secured a job at General Motors and they secured a house on Buena Vista Ave in Oshawa.

In his early life Bill developed a love for music and played in an Irish Pipe band in Oshawa and then took lessons on the cornet from Jack Broadbent and eventually joined a local Brass Band. And then on July 23, 1949 everything changed for the better.

Bill married “his little nurse”, Audrey Anne Whitsitt (nee Crooks), whom he adored and was the one true love of his life.

Married life for Bill may have initially felt a bit conflicting with a wedding night at the much too expensive Royal York Hotel, where his new bride placed a curiously long phone call to her mother.

The couple then went on to Muskoka where he came to learn firsthand of Audrey’s comfort and undeniable skill with a rifle. But love prevailed as it should and as their family grew; life during the week revolved around the predicable – work, maintaining a household and keeping three energetic boys on the straight and narrow.

Bill’s commitment to family led him and his wife to become members of the Church of Jesus Christ of Latter-day Saints in 1949. He served in many responsibilities throughout his adult life including almost 40 years as a Stake Patriarch – a testament to his stalwart faith.

In 1942 Bill began working at General Motors, his first and only job, initially as a machinist and eventually retiring some 44.5 years later as a supervisor in the Experimental Engineering Department.

Not to be outdone by GM, the 156 year-old Oshawa Civic Band lays claim to 80 years of Bill’s musicianship.

During those years he won the Dominion of Canada’s Gold Medal at the CNE two years in a row for his proficiency in playing the euphonium. Only the Covid pandemic was able to force Bill to put down his euphonium.

Recognizing Bill’s civic contributions, the City of Oshawa honored him in 2016 as Senior of the Year.

Bill was exceedingly proud of his children’s and grandchildren’s educational successes, and as a voracious reader he was keenly interested in history and politics, always ready to engage in a conversation about current affairs.

With a wry smile and a sensibility that is not so common these days, his plainspoken observations were always grounded in compassion and a genuine concern for humanity.

Throughout it all, Bill was known and beloved as a man of faith, as a hard worker, and for his sense of humour and humility. He will be dearly missed.

The family would especially like to thank Jarom Verdonk (PSW) whose care and humour was a constant solace for Bill in his last weeks; also Bob and Janet Warrington for always being there, night and day, when Bill needed help.

Expressions of sympathy may be placed at  oshawafuneralhome.com .

Donations in lieu of flowers may be made in Bill’s memory directly to the Canadian Cancer Society or to the Humanitarian Fund of the Church of Jesus Christ of Latter-day Saints.