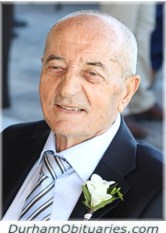 Passed away peacefullyin his 88th year, with family at his side at Lakeridge Health Oshawa.

Jerzy was born in Dabrowa, Poland. As a boy, he was taken away to a work camp in Austria. After a stint in the Polish armed forces in Italy, he spent time in the Middle East. Then he settled in England where he met his Zosia. The family immigrated to Canada in 1957.

Most of Jerzy’s working life was spent at General Motors. After he retired, he became a snowbird in Florida and took up golf.He loved fishing and spending time with his family at the cottage. As a skilled builder, he was a perfectionist.

Generous with his time and skills, Jerzy was always helping others.  He had a wicked sense of humour and played a mean game of euchre. He will be greatly missed.

The Pietrusiak family would like to express its sincere gratitude to the caring staff at Lakeridge Health and Chartwell Wynfield Retirement Home.

In lieu of flowers, donations to the Alzheimer Society would be appreciated.

Expressions of condolence may be placed at e.touch.ca.