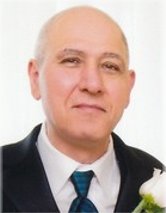 GIANCROCE, Nick - It is with great sadness that we announce the passing of Nick Giancroce. Nick passed away at the age of 65 at Etobicoke General Hospital on Wednesday, November 6, 2019, surrounded by his family.

Survived by his loving wife of 40 years, Cathy, and his daughters, Jennifer (Sam), Laura (Domenic) and Michelle (Carla).

Leaving behind his three grandchildren, Luca, Marco and Summer.

Loving uncle and Zio of many nieces and nephews.

The family would like to thank the doctors and nurses at the Palliative Care Unit at Etobicoke General Hospital for their compassionate care during this difficult time.

Nick will never be forgotten and always in our hearts.

Resting at Newediuk Funeral Home, Kipling Chapel, Toronto on Sunday, November 10, 2019 from 2-4 and 6-9 p.m. Funeral Mass will be celebrated at Transfiguration of Our Lord Church, 45 Ludstone Drive, Toronto on Monday, November 11, 2019 at 10:30 a.m. Entombment at Woodbridge.