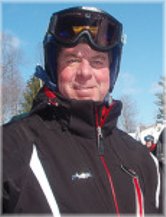 He leaves in mourning his parents, Don and Diana Greer, his children D’Arcy and Katherine (and their mother Liz De Jong (Geoff Benson)), his sister Susan, her husband Rob Hough and children Sally and Ella, and Kevin’s partner (Alice Millen Reese).

Kevin’s home and passions were on the Caledon ski hills. He introduced D’Arcy and Katherine to skiing soon after they began walking. As they grew up, he eagerly supported them in their racing endeavours.

When his injured knees put an end to his favourite sport, he committed every weekend of the ski season to volunteer at the races. It didn’t matter if it was double digit negative temperatures, Kevin would stand in the starting gate for hours.

Kevin’s commitment to downhill racing led him to serve on the board of the National Ski Academy. He also volunteered for many years on the board of his high school, Rosseau Lake College, helping to shape the direction of the school for years to come.

Kevin owned and managed Adams Equipment, the Burlington Storage Barn, and other ventures with his father Don and other business partners.

Kevin leaves his children D’Arcy and Katherine, two wonderful young adults. How sad we are that he will not see them continue to flourish. He was also the best of sons, offering close friendship and support to his parents in countless ways.

It is devastating for us to lose Kevin at only 54 years. It is even sadder that it happened now, as the snow starts to fall, when Kevin would have been at his happiest.

A tribute will be held at Grace Church on The Hill, 300 Lonsdale Rd., Toronto on Thursday December 12th, at 11:30 -- and at a later date, a celebration of life will take place at the Caledon Ski Club.

In Kevin’s memory, should you wish, you can support the next generation of Canada’s skiers with a donation to Alpine Canada or a youth sports organization of your choice.