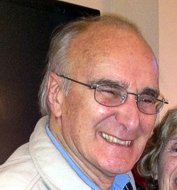 Tony was born in London, UK on December 24, 1935. During the war the family moved to Birmingham where Tony he grew up and eventually met Nadine. He served in the British Army from 1957 until 1959 and married Nadine on April 26, 1958 while still in the service.

Once he had demobilized he went to college to earn an Engineering Degree with a Speciality in Hydraulics. After graduating he worked for a number of companies and moved around England.

His eldest son Ian was born in Birmingham in 1964 and Ross in Kidderminster in 1967.

In 1969 he transferred with Vickers to Toronto. Ever a man for adventure and a new experience he and his family moved to Thunder Bay in 1974 where he lived his dream to build his own home on 40 acres of land outside of Thunder Bay.

He loved all things mechanical with a life-long passion for motorcycles, tools, fixing and building things. He was an avid runner, hiker and rock climber and enjoyed these activities into his 80s.

He was a quiet and faithful Christian who spent much time every day praying for others.

He is survived by his beloved wife of 62 years, Nadine. His sons, Ian and Ross and a treasured grandson, Thomas.

A celebration of life for Anthony will be held Sunday, February 23rd from 2 - 4 p.m. at Thompson Funeral Home, 530 Industrial Parkway South, Aurora, ON., L4G6W8.