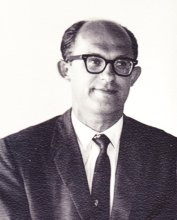 Nicholas William Dick passed away peacefully April 2, 2020, early in the morning at St Clair O’Connor Community at the age of 91.

After several years in long term care, he slipped quietly away and is now at peace with God.

Nicholas entered this world on September 6, 1926, in Waterloo, ON, the third of four siblings born to Nicolai and Anna Hamm Dick who arrived from South Russia from Ukraine in 1924. He attended Vineland Public School and two years at Beamsville High School before the family moved to the Niagara region.

He completed high school at St. Catharines Collegiate Institute and Vocational School where he was attracted to technical subjects, especially electrical theory and practice, graduating in 1946.

He then tried his hand at electrical work, starting with knob and tube wiring which was still in vogue. Realizing the difficulties of operating as an electrician on his own in spite of his training, he took a job from an experienced electrician in commercial and industrial wiring and spent several years in this trade.

Nicholas was active in a youth group in his home church at Niagara-on-the-Lake and was baptized in 1952. He was encouraged to proceed to Biblical Studies, initially at Bible School, then at Canadian Mennonite Bible College in Winnipeg where he obtained a diploma, followed by a transfer to Bethel College, Newton, Kansas, where he received a BA in Religion and English.

Continuing his interest in theology, he attended Mennonite Biblical Seminary in Chicago, graduating with a BD from the new campus located in Elkhart, Indiana, in 1959. During a volunteer summer service experience at the Brandon Mental Hospital, Nicholas met his future wife, Harriet, and they were married before attending seminary.

Nicholas then served as assistant pastor at First Mennonite in Saskatoon, and in 1961 was called to Toronto United Mennonite Church where he served for seven years. He pursued further education in social work at the University of Toronto receiving an MSW in Administration. Meanwhile, he became involved in directing the MCC Toronto Service Program, a demonstration project utilizing volunteers to repair homes of seniors. He was also active in Don West Neighbors, a non-profit housing corporation involving the acquisition and rehabilitation of housing for families. He became a researcher for the Ontario Ministry of Community and Social Service for several years.

These experiences led to an offer of employment by Canada Mortgage and Housing Corporation as a regional coordinator, a role which included the promotion of non-profit housing. After a change in leadership of the federal government, Nicholas left to become interim administrator of the Chateau Gardens Nursing Home in Niagara-on-the-Lake.

With other partners he developed Sheltercare, a consulting group that helped churches and other community organizations to get into non-profit housing throughout southern Ontario. During this time he served as the first administrator of Christie Gardens in Toronto, a large, non-profit retirement facility he had helped to develop.

Together with two other Mennonite pastors, Nicholas became a director and founding member of Willowgrove with their purchase of a farm in 1968. This farm, now a non-profit organization, has become a community service to the Markham, Stouffville, Toronto, area with a day camp, farm education program and retreat. Many Saturdays were spent there with his sons working in the development of the property.

Nicholas always remained active at TUMC assisting in many projects, such as several church expansions, the settlement of refugees and the development of St. Clair/O’Connor Community.

In retirement Nicholas produced two family books: “The Unruh Ten”, in 2004, his mother’s genealogy was done with the participation of two other relatives and help from the descendants who contributed personal stories. In 2008, he wrote "The Dueck Eight Family Book," his father’s ancestry and family stories. Information for these books was supported by Nicholas’ travel to Ukraine four times and to Germany three times. Nicholas also assisted in the formation of Friends of the Mennonite Centre, a community centre in Ukraine, which now provides significant service there.

Nicholas is survived by his wife, Harriet (Amstutz) Dick, and has been blessed with three sons and three granddaughters who provided joy and fulfillment of a parental dream: Nathan (Peggy Souder) of Newton, Kansas; Alan (Lori Klassen), and Paul (Tina Harrington) of Owen Sound area and their three daughters, Hannah (Thomas Fowlston), Sarah (Benjamin Rudy-Froese), and Esther.

We thank God for Nicholas’ life. He modeled for us: industry, integrity, justice, and charity, all components of his Christian faith.

Given the current situation with Covid-19 and guidelines about social interaction, memorial service plans have not been made at this time. Memorial gifts though can be made to Parkinson Canada or St Clair O’Connor Community Foundation