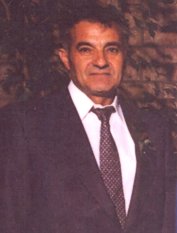 He was predeceased by his parents, Carmine Bruno and Lorita DeCicco.

He was born on June 14th, 1935 in Malito, Calabria, Italy to Carmine Bruno and Lorita DeCicco. In 1957, he married Rosa and moved to Toronto, Canada in 1958; it was there where together they raised a large family that brought Paolo tremendous pride and joy.

A lively and enthusiastic host, Paolo’s home was always open to visitors. You couldn’t visit without being forced to eat— even if you had just eaten and even if he told you were looking a little fat. Pasta, soppressata from the cantina, bottles of his homemade wine and various crackers, cookies and Pane Vittoria covered the dining room table at all hours.

Paolo had a passion for gardening, the Toronto Maple Leafs and tinkering. He spent many days building things in his garage, and his creative inventions included a homemade BBQ and bicycles for his grandchildren made of many small parts acquired at the side of the road.

Known for being strong-willed, he survived an emergency quadruple bypass in 2005, but only after agreeing to it -- not because his blockages were so extreme and his condition so grave he was told he wouldn’t survive without it, but as he put it, to ‘help the doctor make some money, because he has to feed his family too.’

Funeral Mass for 50 guests only at St. Brigid's Church, Toronto on July 10th at 10:00 a.m.  Entombment at Westminster cemetery to follow the Mass. (Arrangements with Trull funeral home)