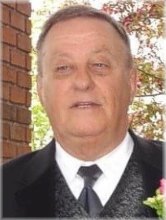 MELVILLE, John Frederick George - At the age of 79, Fred Melville, passed away peacefully with family by his side on Monday, August 3, 2020.

Fred was born to Andy and Ruth Melville in Port Arthur, Ontario, the eldest of seven children.

Fred moved to Toronto in his early twenties where he started his career in the Automotive industry in Sales and then Management, the same industry he would retire from 40+ years later. Fred was an extremely hard-working man, working long hours regularly.

Fred is survived by his loving and caring wife Jackie who took tremendous care of him, his son Jason and daughter Kristin (Drew) Laswick, his grandchildren, Jacob, Katheryn and Nicholas Melville, Holly and Mitchell Laswick.

Fred will be missed by his many nieces and nephews.

A Private Service will be held for the family.  Private Burial for Family to Follow.

Donations made in lieu of flowers can be made to Hospice Simcoe.