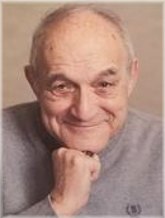 OLIN, Jack - After a life fully and well lived, we are sad to announce the passing of our dad on Tuesday, September 15, 2020.

Cherished companion of Shirley Granovsky who brought a smile to his face and was the light of his life these past six years.

Survived by his brother Peter and sister-in-law Roz Olin of Winnipeg and many loving nieces and nephews.

Family was important to Jack and his children grew up close and connected with his rather large and loving extended family of aunts, uncles and cousins, too many to count, spread across the continent who will also miss him.

Born in 1930 in Winnipeg Manitoba, Jack obtained his BA and MD at the University of Manitoba. Summers spent in the army reserves at Camp Borden to support his medical studies brought him to Ontario where he met his future wife Frances, to whom he was married for 43 years. He became a Captain R.C.A.M.C. and served as a Medical Officer in the Royal Regiment.

Always charming, quick witted, and able to speak at least a few words in many languages, Jack could light up any room with his boyish smile and dimpled chin. He will be sorely missed by so many.

Special thanks to the wellness team at Living Life on the Avenue who always took such great care of our dad and the palliative care team and nurses on 10S at Mount Sinai Hospital who made his final days as comfortable as they could be.

A graveside service will take place on Wednesday, September 16, 2020

Donations to the Israel Cancer Research Fund 416-487-5246 or charity of your choice are welcome.