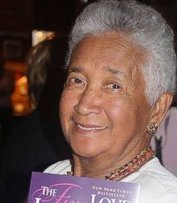 At nine years of age Gwen attended an audition for a dance competition where the winner was able to join the EOAN Group. EOAN Group was a social and educational centre and cultural association that offered music training for the Coloured community of District Six. She won the competition and this was the beginning of her dance career.

Once she left high school she became a teacher for the EOAN Group, she enjoyed travelling to different schools to teach underprivileged children. Gwen was contacted by the director of Cape Town University and became the First Non White Student and subsequently completed a three year program of study within two years with honours and made History on the day she received her diploma. At the young age of twenty she became Dance Director of the EOAN Group, touring all the main cities of South Africa, dancing and teaching during her career.

In 1949 on her 21st birthday she attended a debutante ball and performed for Queen Elizabeth and Princess Margaret. When the Royal Ballet Company toured Cape Town, Gwen met all the leading dancers and took Master Classes with them.

In 1968 Gwen left for Canada and began dancing again with the Etobicoke Recreation Department where she met a friend and they started their own successful dance school called Markland School of Dance Arts. Ever the entrepreneur Gwen took up floral design and became the proud owner of Garrett's Flowers on Avenue Road, in Toronto where she specialized in floral creations for Weddings, Parties, Galas and Fundraising.

Gwen joined the new organization South African Women for Women and was presented with an award for her career in Dance Theatre Teaching while she lived in South Africa. She met Nelson Mandela and afterwards had tea with Archbishop Desmond Tutu, at his birthday party. On an another occasion she met The King & Queen of Sweden. At age 72 Gwen continued teaching at the Lakeside Montessori school were some of her grandchildren attended, teaching rhythm and movement classes. Gwen’s last performance was in May 2015 at the age of 86 in a senior dance troupe that took to the stage Dancing in the Third Act.

Gwen you led an extraordinary life and you were always an amazing woman. You touched so many lives and you were an inspiration to us all. We will miss your SMILE until we meet again...

Gwen asked us to share the following message: "If there is music, the lyrics of SMILE by Nat King Cole always meant so much to me, especially when I felt down in the dumps. I always remember my mother telling me a smile can bring so much happiness to many people and it doesn't cost a penny. All my life on stage my teachers used to tell me, Do not forget to smile!"

Due to the Covid19 pandemic we have decided on a private funeral service for the family at Ward Funeral Home, Weston, Ontario, followed by cremation.

A CELEBRATION of LIFE ceremony will be arranged in the Spring of 2021, Covid19 permitting.

In Gwen's memory donations may be made to the Canadian Cancer Research; Sick Children's Hospital or a charity of your choice.