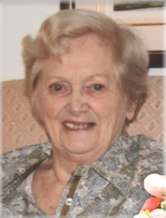 Barbara was pre-deceased by her parents William Charles and Dorothy and her sisters Dorothy and Peggy.

Born in Toronto, Barb attended Northern Collegiate and subsequently pursued her career as a legal secretary at Fleming, Smoke and Mulholland.

Barbara met Arthur as a British airman when he visited Toronto during training in Canada. After the war they enjoyed 73 years of a dedicated marriage.

Sincere thanks are given to Elizabeth Gordon, a dedicated support provider from VHA, who attended to Barbara’s care through many of her final years. Appreciation is also given to the support staff at Leaside Revera Retirement Home who worked tirelessly to support Barbara’s needs especially through the past challenging year.

Final appreciation is given to the skilled, caring and supportive staff at Michael Garron Hospital who made her comfortable over her final days.

Cremation has already taken place and a private immediate family memorial service will be held at a future date.

Should you wish to donate in Barb’s memory please consider the Michael Garron Foundation at https://mghf.ca or a charity of your choice.