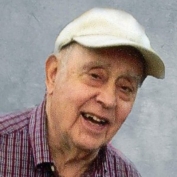 John was predeceased by his loving wife Rita, his parents Dominic and Margaret as well as his sister Ann.

John is survived by his son John and daughter-in-law Kristin, his daughter Madonna and son-in-law Tom. He will be remembered fondly by his cherished grandchildren Leia, Jade, Skyler, Lisa and Jason.

Visitation and service will be Saturday May 1st at Scott Funeral Home (Mississauga chapel).

In Lieu of flowers please consider making a donation to the Ian Anderson House in Oakville Ontario in John’s name.