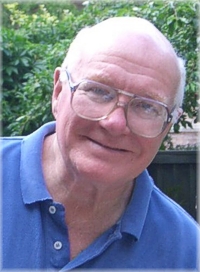 When war broke out and Jack went to fight, Peter and Anne returned to her parents' home in Toronto where Peter went to Brown School.

Jack died in 1946 and Anne was remarried to John Fairlie, and soon Peter was joined by brothers Tam (Alison), David, and Matt (Heather) Fairlie.

Peter attended Crescent School, Trinity College School in Port Hope, ON, and then Queen's University, where he played football with the Golden Gaels and earned a degree in Mechanical Engineering.

It was also in Montreal that he met Jeannine Lucas, the love of his life. They were married in 1968 and had three children: Kimberly (Ken Darlington), Alexander (Becky) and Maxwell (Christina).

Peter is survived by his wife of 53 years, Jeannine; his children, their spouses and his grandchildren Olivia and Charles Darlington; Jack Saegert; and Thomas, Ella and Michael Saegert.

A memorial service will be held at a later date when conditions permit.

In lieu of flowers, please make a donation to the Margaret Bahen Hospice in Newmarket.