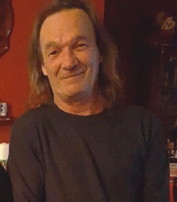 MATTHEWS, John - John Matthews passed away on Tuesday Aug 3rd, 2021 after a courageous battle with cancer. He was 62 years old.

John was born on May 25th, 1959 in the beautiful province of Newfoundland, on the west coast in the city of Corner Brook.

John was a very hard worker as he spent 30 years at the same Steel company in Brampton. He was a very dedicated employee and when the day was done, his extremely sociable nature, easy to get along with attitude, enjoyed time with family and friends.

John is the most kind hearted soul who would give the shirt off his back to anyone.

Our family may describe the outdoors as like a playground for John, as he spent many of hours in boat fishing and days in the woods hunting.

John was an very happy adventurous man, from the time he spent outside to being a husband, father, pop, brother, uncle and friend in the kitchen cooking a beautiful jiggs dinner that would melt in your mouth for anyone. With the music in the background, a beat in his steps, a smile on his face, you knew your were welcome.

John’s wishes are to be cremated and laid to rest with his mother and brother in the heart of his homeland Newfoundland at a later date when the family is ready.

He will forever be in our hearts.