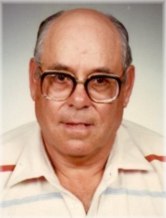 DA LUZ, José - It is with deep sadness and heavy hearts that we announce the passing of our beloved Father/Pai, Grandfather/ Vovô and Great-Grandfather/ Bisavô, José Da Luz (Brampton, Ontario) on Tuesday, September 14, 2021 at the age of 95.

He would love to share stories of his fisherman days, the people he befriended and often reminisced about his family back home. He loved to cook and be surrounded by his loved ones. His absence leaves us with a void.

Forever in paradise and reunited with his beloved wife Lubélia Inacia Da Luz, and son Eduardo; Jose is mourned by his children; Lúcia (Manuel), Emanuel (Maria do Céu), Lubélia (Norberto), José and Paulo, 18 grandchildren and their spouses and 21 great-grandchildren.

A visitation will be held at the Brampton Funeral Home, Brampton on Monday September 20th from 3-7 pm. Funeral mass will take place on Tuesday, September 21st at 9:30am at Our Lady of Fatima Parish, 101 Malta Avenue, Brampton.