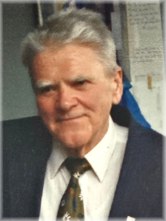 BIGALL, Fritz Ernst - (1928 - 2021) - Fritz passed away peacefully in his sleep in the early morning, on Sunday, September 19, 2021 with one of his loving daughters by his side and the loving thoughts and prayers of his whole family.

Predeceased by his loving wife Mary in July 2019, we are thankful that they shall now be together again.

Fritz was born in Zurich, Switzerland.

As a young man, he served in the Swiss Army and trained as an electrician and draftsman.

In his early twenties, Fritz accepted a job in South Africa where he lived for several years. He worked diligently to improve his English by learning a new word from the dictionary every day. He met his future wife Mary Taylor, who was working as a chemist at the time, in Johannesburg. Together they explored many places in South Africa, and their friendship and love for one another deepened through many shared interests including bridge and tennis.

Fritz and Mary travelled through Europe on their honeymoon and then boarded a ship across the ocean to Canada. They lived in Don Mills for several years where their eldest daughter Janet was born.

Fritz will always be remembered for his industrious spirit, his drive to learn, and his zest for life. As a beloved father, grandpa, and great grandpa he will also be remembered for his love of camping, fishing, swimming, the great outdoors and long, long strolls down sunny, sandy beaches!

A private gathering for family will be held at the McDougall and Brown Funeral Home on Saturday, October 2nd, 2021, followed by his internment.

In lieu of flowers, please consider a donation to the Alzheimer Society.