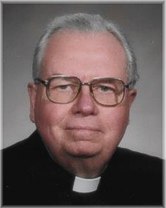 He was predeceased by his parents Claude Arnold and Sarah McCulloch, both born in Ontario. Fr. Claude was an only child born in Detroit, MI, on November 15, 1929 but received his education in St. Catharines, ON and Windsor, ON, graduating from Assumption H.S. in 1947.

He obtained a B.A. in 1952 and a M.A. in 1953 at Assumption College. Fr. Claude made his first profession with the Basilian Fathers in 1954. He immediately entered St. Basil's Seminary, Toronto and was ordained to the priesthood on June 29, 1958.

He was a quiet but intense man who served as the superior of the Basilian Fathers at St. Michael's for six years. Fr. Claude enjoyed listening to classical music throughout his life. He retired to Anglin House, Toronto, in 2010 until he recently caught the flu which led to severe pneumonia and hospitalization.

Visitation will be held in the Chapel of the Cardinal Flahiff Basilian Centre, 95 St. Joseph Street, Toronto, on Thursday, February 22, 2018 from 9 a.m. until a Funeral Mass at 10 a.m. Interment will follow in Thornhill, ON.

In lieu of flowers, donations can be made to the Basilian Fathers Retirement Fund, 95 St. Joseph Street, Toronto, ON.