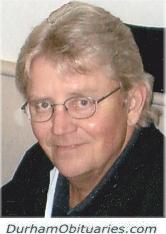 Ted passed peacefully on August 4, 2019 with Debbie by his side from complications due to Frontotemperal Degeneration.

Ted was the devoted loving husband of nearly 40 years to Deborah (Hobbs).  Best friends for 49 years.

He is predeceased by his mother and father Francziska and Walter Kalmuk and nephew Wally Kalmuk.

Ted will be greatly missed by his sister Sophie Kalmuk, sisters-in-law and brothers-in-law, Chris and Ed King, Gary and Carol Hobbs.

Great Uncle to Brandi and Vanessa Kalmuk and Hunter Gibson.

Visitation will be held at THORNTON FUNERAL CENTRE 1200 Thornton Road N, Oshawa, from 10 am  until 11 am on Wednesday August 14th 2019.  A Memorial Service will follow in the Chapel at 11 am.

A special Thank You to our neighbours, the Cuddies and Lazures, Colleen, Laura and Christie from Home Instead.  Your care and concern for Ted was so comforting.

In lieu of flowers a donation to the  CHARITY of your choice.