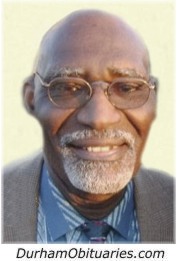 Passed away on March 31, 2020 at Lakeridge hospital in Oshawa, Ontario, at the age of 76, with his daughter by his side. Luther will be dearly missed, as a father, grandfather, brother, uncle, cousin and friend, to so many.

Luther is survived by his three children, Junior, Wayne, and Cynthia, of whom he was extremely proud.

Luther was born the second of 15 children to parents, Luther Small and Elaine Bowen, on November 1, 1943 in St. Michael, Barbados.

He was raised in Roadview St. Peter, Barbados by his grandparents, Ma and Ta Bowen, whom he loved dearly.

Luther immigrated to Canada on September 12, 1967 to be with his sister and second mother Deloris.

He arrived just in time to meet his newly born niece Michelle who he had developed a special bond and loved dearly.

He looked forward to spending time with his baby sister every summer, showing her the ropes on the “art” of frying fish.

Luther worked at Rexnord for many years prior to commencing his employment at Ford Electronics in 1986, where he worked until his retirement in 2002.

During his employment at Ford, Luther developed many meaningful friendships which he maintained and held dear up until his passing.

Luther also truly loved his best friend and sidekick, Charlie, his loyal dog. Luther enjoyed “passing on the legacy” by telling stories of his grandparents and his life in Barbados.

He upheld Ma’s teachings and reminisced frequently on hauling pots with Ta.

Luther was most proud of his relationship with the Lord and the work he performed in the name of Jesus with the Children of Zion by his side.