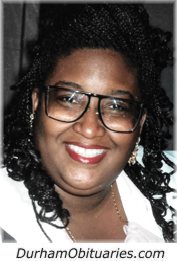 It is with a heavy heart that we announce the passing of Karyn Andrea Lewis.

Karyn passed the morning of April 25th in Pickering, Ontario after a long and brave battle with early onset Alzheimer’s that was further aggravated by a recent Covid-19 diagnosis.

A multifaceted marketing professional, she was employed for many years at Future Electronics (Pointe Claire, Qc) but also made a name for herself as one half of two different dynamic duos in Montreal’s entertainment and fitness arenas.

She was the co-owner and manager of Soul Impact Production Studio in the 90s, working with the fitness Phenom Dale King.

She also partnered with her brother, the late Keith Lewis, to produce countless urban comedy shows, concerts, Christmas Charity Dinners and other special event under the Keith & Karyn umbrella from the 80s through to the 2000s.

She was “big sister” and mentor to many as well as a compassionate listener, advocate and friend.

Her infectious smile and laugh touched all that met her.

Her creativity, dedication and kind spirit will be missed by her friends, her father, Edwin Lewis and her sister Esther.