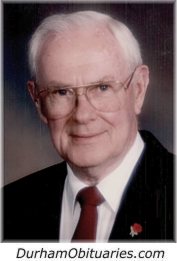 Passed away peacefully at his home, surrounded by the love of his family, at the age of 91.

Predeceased in 2017 by his beloved wife and partner, Lorraine, with whom he shared a marriage of 64 years centred on family and faith.

Beloved father of Catharine and Bob White of Ottawa, Paul Corey and Patricia Woodley-Vooys of Tyrone, and Anne Marie Corey, of Oshawa.

Joseph is also survived by sisters-in-law Nancy Corey (William, predeceased) and Yvonne Corey (James, predeceased), by his brother-in-law and sister-in-law, Kenneth and Ruth Ann Mead, as well as many nieces and nephews.

Joseph was born in St Catharines to Mary Rose and William Corey, recent arrivals in Canada from the north of Ireland, and moved to Toronto with his family in the early 1940s.

At St Clare’s Parish in Toronto, he met Lorraine, and they were married there in 1953.

At the age of 17 he began a 47 year career with Bell Canada, where he held various positions throughout Southern Ontario.

In 1965 he was transferred to Oshawa, and that began his 55 year involvement with St Mary of the People Parish. As a member of St Mary’s Parish, he was a long time usher, member of the Knights of Columbus, dish washer, Parish Council member, Durham Region Share Life Chair, as well as Director of the Marriage Course and Convenor of the New Years’ Dance with his wife Lorraine.

As a man of deep faith, he was always willing and happy to help the operation of the parish in any way possible.

In 1972 he was elected as a Trustee to the Ontario County Separate School Board, and held that position continuously for 38 years.

Following retirement from Bell Canada, he took on the role as Co-Administrator of Marion Place Senior’s Residence for 18 years, finally retiring for good at the age of 83.

Through his ‘retirement’ he was a much loved and busy grandfather, taking a very active part in the life of his extended family.

In later years, and as Lorraine’s health declined, he took care of her faithfully and without complaint.

Joseph enjoyed life – and embraced everything that life sent his way with an optimistic turn of phrase, a smile on his face and a twinkle in his eye.  We consider ourselves blessed to have been part of his family!

A private funeral mass was held at St Mary of the People Church, Oshawa, with interment of his cremated remains to take place at Resurrection Cemetery, Whitby.

Online condolences to the family can be made at the website of the OSHAWA FUNERAL HOME.

In lieu of flowers, those wishing to make a memorial donation may do so to the St Vincent de Paul Society – Marygrove Camp via the CanadaHelps website.

Eternal Rest, Grant unto Joseph, O Lord, and May Perpetual Light shine upon him.
May he rest in peace. Amen.