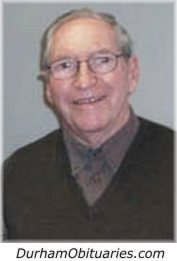 It is with great sadness that we announce the peaceful passing of Cecil Ross Williams on Wednesday July 29, 2020 in his 96 year, at the Wynfield Long Term Care Residence, Oshawa.

Cecil was predeceased by his brothers Roy and Leslie and his sister Mabel as well as his youngest daughter Gail Gerrow.  He is survived by his wife of 70 years, Mary Elizabeth (néé Bristol).

Cecil was a private in the reserve army, Medical Corps, from 1942-43. In December 1943 he joined the Navy and on January 12, 1944 he left Toronto for basic training in Kingston.

While in the Navy Cecil served as Officers’ Steward but during action he manned a depth charge thrower for anti-aircraft.  When the war in Europe was over, Cecil volunteered for service in the Pacific and was discharged on March 14, 1946.  After WWII Cecil studied Architecture at Ryerson graduating as an Architectural Draftsman.

In the fall of 1950 Cecil was hired by Pentland & Baker Architects where he assisted in the design of many schools and community centres in Southern Ontario.

After the completion of the building project Cecil was hired by Oshawa General as Director of Hospital Services.  Later he studied hospital management and was promoted to VP of Planning and Development.

He retired in December 1990 after a highly successful and productive career.  During his retirement Cecil and Mary were able to fulfill their love of travelling, by taking many, many trips abroad, to Florida and across Canada.

During his retirement years Cecil volunteered at Parkwood Estate, utilizing his management and architectural skills to undertake responsibility for several refurbishing and renovation projects keeping to the strict historical requirements of this heritage site.

In addition to his countless hours devoted to Parkwood, Cecil has been a dedicated volunteer with many community organizations and charities over the past 70 years including Trustee for the Richmond Hill Board of Education, The Richmond Hill Junior Chamber of Commerce, Cystic Fibrosis Canada, and St. Matthew’s Anglican Church, Oshawa.

He coached baseball at the park level for his son’s team and also for the Oshawa Hospital Recreational Baseball League.  Another project that Cecil assumed on his own time was to organize ‘Stop Smoking” education which he urged his employees to attend free of charge.

Many staff have thanked Cecil over the years for the encouragement he gave them to quit smoking and ultimately improve their health.

Cecil was truly a self-made man.  Despite growing up poor during the Depression and suffering severe hearing impairment, which gradually worsened over the years, he was able to become successful on many fronts.

Above all he was devoted to his wife Mary, his children and grandchildren and was a strong proponent of education as a means to success and self empowerment.

We want to thank the dedicated and hard-working care professionals at the Wynfield Long Term Care Home and especially the extraordinary  Dr. Ngoc Nguyen who was Cecil’s physician.

Special thank you to two wonderful and caring friends, Suzanne and Nancy, who provided so much love and support to Cecil during his stay at the Wynfield.

A celebration of Cecil’s life will be held on Saturday August 1st. Friends are invited to join the service via: https://www.distantlink.com/SCION6.html at 1:30 p.m.

Donations may be made to Cystic Fibrosis Canada or The Parkinson’s Foundation.

Condolences may be shared at oshawafuneralhome .