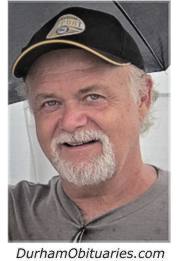 Born in Cobourg on January 19th, 1954, and raised in Oshawa, John was predeceased by his parents Edwin “Ross” and Marion (nee Whittaker).

A proud and loving father, John leaves behind two sons, Daniel and Mackenzie.

John also leaves behind 10 nieces and nephews, and a large circle of true and loyal friends, all of whom loved him very much.

John was a quiet, gentle soul, funny and fun to be around, he was also capable of serious and thoughtful conversation and advice.

John graduated first from Eastdale CVI then from Fanshawe College after briefly attending Western University. He then joined Ontario Hydro where he remained until his retirement in 2013.

After enjoying the bachelor life, complete with his prized 1966 Pontiac Parisienne convertible and the Lake Papineau cottage he co-owned and Al, with whom he shared an extra-special relationship, John finally settled down with Donna in 1990.

Their union was blessed with two sons, Dan and Mack, and although the marriage wasn’t destined to last forever, they remained friends.

Thanks to friends Jerry, Butch, Debbie, Anne-Marie, James, Dave, Cindy and Rob and all his helpful and caring Harmony Road neighbours.

According to John’s wishes, cremation will be followed, and when conditions allow, there will be a celebration of his life.

In lieu of flowers, donations can be made in John’s memory to the Heart and Stroke Foundation.

John, you are loved and you will be missed.