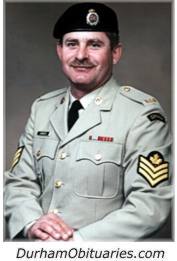 He will be sadly missed by his grandchildren Alex, Aleeyah, Madelyn, Gavin and Travis.

He will be fondly remembered by many of his nieces and nephews.

Ron joined the military in 1969. When he left for his recruitment training, all of his family met at his home on Darlingside Drive.

They then all drove down to Union Station to say their goodbyes and to give him a Dudley Family send off.

He graduated in 1970 from Cornwallis, Nova Scotia Naval base, then headed off to Borden to take his training to become a supply tech.

Ron was posted in many places over the years which included Downsview, Calgary, Whitehorse, Trenton, Regina, Toronto and served a tour in the Middle East.

His final posting was with the Sea, Army and Air Cadets.

Ron was very proud to serve his country for over 40 years and retired as a Ret’d Force Sergeant.