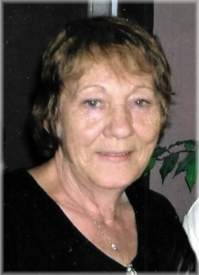 Born Linda-Anne Cox in West Ham, Lynne spent her formative years in East Ham and was a life-long fan of “The Hammers."

She was only 9 years old when her Father, Walter Charles Henry Cox, passed away from mesothelioma.

Her mother, Annie (nee Warman), passed away two years later and Lynne was then raised by her loving aunt and uncle, who also raised her brother Brian, who was seven years her senior.

With her brother’s contacts and a wide variety of friends, her teenage years were an education in the budding music scene. She was tall for her age and could get into pubs and clubs that played jazz and rock music.

In these years she met and was befriended by many popular artists from the sixties, including Rod Stewart.

She left school at 14 and worked her way up to being the executive secretary of the owner of a local Dairy Products Company. She lived in Navarre Road East Ham until 1972. When she couldn’t attend the match, she could still tell when West Ham scored as the cheers from close by Upton Park could be heard in her room.

She was known as a great darts player in her local area. They would often play for drinks and she seldom lost, in which case she would have them hoarded behind the bar to be served up when she was ready. When I met her, it was the first time I had seen a pint of Babycham. She continued playing in Canada and was a much-feared opponent, especially when she took off her shoes.

She left East Ham to move in with her future husband in South London and in September 1972 she moved with him to Canada. This was after discharging herself from hospital, when an ulcer burst the week before departure. Her secretarial skills were soon employed in recruiting engineers and designers for De Havilland’s STOL program.

She married Michael Sheahan on March 27th, 1973 on a 24-hour license at the Salvation Army chapel in downtown Toronto. There were five people in attendance including her brother, who proudly walked her down the aisle.

She was the executive secretary of the Ontario Pharmacists' Association until the arrival of her daughter in April of 1976. This was followed by the birth of two sons in 1980 and 1983.

The family moved to Otter Creek in Whitby in 1983. While being the caregiver to these three active and challenging children, she still found the time to be the Chairperson of Simcoe Hall, a local charity, that served the needs of less-fortunate children and families. She guided the still vibrant organization through many tough years.

She was a supportive friend, a tough negotiator and a formidable adversary. A fearless defender of her children, there were years in Durham education when the words ‘Lynne Sheahan is here to see you’ would make condescending principals and inept teachers tremble and want to hide under their desks.

In 1991 she took on the task of manager of a popular local drinking establishment. At this she was widely loved, admired and from this she forged many close friendships. Later she went back to school to gain computer skills and became the export manager and executive assistant in a Whitby boat-building firm.

Her retired years were occupied with watching her two grandsons grow, thrashing opponents in Lexulous, and travelling with her husband to Britain, Ireland and New Zealand.

She is survived by her husband, Michael, her daughter, Kerry Fraser, and her two sons, Devin and Brendan.

She leaves a void that will never be filled and memories that will keep us smiling for decades to come.