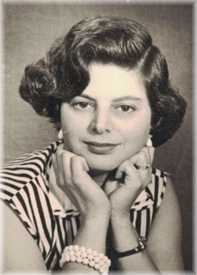 The first child of Henriette and Emile.

Beloved sister to Jacqueline and Simone and brother, George.

Her grandchildren (William, Joanna, Andrew, Marc, Kaitlin, Emma, and Olivia) and her great-grandchildren (Jillian and Rosa), on whom the sun rose and set; sharing treasured moments of both mischief and delight.

As a young bride, Mimi moved to Birmingham, UK, in 1950, with her husband, Brian, where she was warmly welcomed by in-laws, Vincent, Dorothy, Fred, Rene, and Mervyn.

Mimi and Brian were lovingly married for almost 60 years. In her forties, she studied and received her bachelor's degree from University of Toronto and then began a long and successful career with Metropolitan Toronto Separate School Board as a teacher and librarian, where she earned the love and respect of so many students and fellow staff.

Mum never stopped smiling, even though in her later years Alzheimer's took its toll, confining her to her home, where she was under the exceptional care of Marsha, Eya, Joy, Aubrey, and other devoted PSWs.

We are forever grateful to them all.