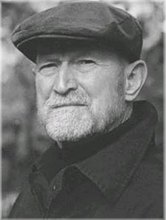 Died peacefully in care, in his 84th year, at Bridgepoint Active Healthcare in Toronto.

His mother died when he was only 3 years old, leaving his father to care for him, older brother Ian and younger sister Margaret.

Karsten and school never quite hit it off and at sixteen his dad "suggested" that he might be happier if he went to work. Having an interest in cars, he got a job at Gorries car dealership.

Another event occurred at this time, which would be a turning point in his life. Two close friends had joined a spiritual group called SUBUD. After trying to convince them to "to quit that crazy group", he had an unusual spiritual experience that partly involved "seeing art a different way" which made him think that he should join his friends.

It proved to be a move that would ground him spiritually for the rest of his life.

He made many trips to Toronto to visit family and friends. One of those friends was a recently widowed OCA classmate, Mary Cserepy. Their visits eventually became more then just friendly and he moved back to Toronto in 2010 to be with Mary.

The happy event was overshadowed by a diagnosis of kidney failure, and he had to undergo hemodialysis three times a week. In spite of this, Karsten was able to attend SUBUD meetings, he and Mary had a lovely wedding, and they spent many happy times with family and friends until he entered Bridgepoint in 2017.

Karsten is survived by his brother Ian and wife Mary (David, Doug, Christopher, Jennifer), Margaret and husband Ron Miller (Steve, Danny), and is lovingly remembered by their spouses and grandchildren, as well as Mary's sister Eva and husband Zoltan and nieces and nephews.

Many thanks to the teams of nurses, doctors and therapists at Bridgepoint and Scarborough General, friends at the Tzu Chi music program and the staff at Tim Horton's. Thanks also to Karsten's SUBUD family, especially Mark and Valentine, for their love and support to both Karsten and Mary.

In addition, Mary wishes to thank all the family and friends who helped her care for Karsten at home.