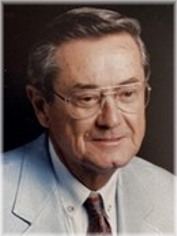 Predeceased by his beloved wife Barbara Ann (Rowntree) in 2005.

Al grew up in Toronto attending Oakwood Collegiate and the University of Toronto, graduating with a degree in Architecture in 1951.

He first formed the firm 'Savage & West Architects' and subsequently he joined the prestigious firm 'Allward & Gouinlock' in 1959, where he retired as senior partner.

Al was also awarded 'Fellow of the Royal Architectural Institute of Canada' after a lifelong membership. The West family were early golfing members at Bayview Country Club, where he served a term as President.

Al was respected for his integrity, humour, wisdom and sense of grace, developing lifelong friendships both in golf and business.

Al supported his daughter Stacey as she competed in golf across Canada, winning four Canadian National Championships and then representing Canada on International Teams.

Al mentored his daughter Theo as she developed as an interior designer, starting her own practice in Toronto - 'Westparks+Associates'.

He had an open door, time to listen and the ability to offer advice when needed.

He will be missed. Cremation has taken place and a Celebration of Life will be announced when our present health crisis subsides.

In these difficult times, in lieu of flowers, please make donations to the hospital of your choice.