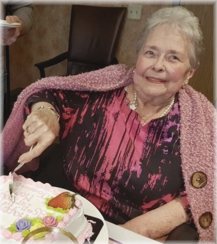 Daughter of a United Church minister, Joanne was born in St. Thomas in 1934, lived in Lawrence Station, then Thamesford, and later Riverdale and Earlscourt in Toronto.

She worked for Eaton's while in High School.

Because Joanne lost her father while in Grade 12, she had to be frugal to afford university tuition. Graduate of Victoria College at the University of Toronto, studying English Literature and Religion under Northrop Frye.

Upon graduation she entered Teacher's College at the University of Toronto's Faculty of Education.

Her teaching career began in Kincardine, and was followed by teaching positions in Toronto at Northview Heights, Parkdale Collegiate, Castle Frank, and Heydon Park.

Appointed as an instructor in York University's Department of Education, she went on to become the Head of Special Education at Heydon Park.

Over the years, Joanne participated on various committees within both her church and the Toronto District School Board. She had a tremendous empathy for the learning challenges and needs of students, something that became the driving force for her studies in Special Education and the development of board-wide curriculum.

Joanne and William were tremendous hosts, sharing laughter, fun and engaging thought-provoking intellectual discussions with both friends and family at their home in Toronto and their cottage at Bruce Beach.

She was devoted to her mother who was a big part of her life and was grateful to have had the opportunity to provide palliative care at the end of her life.

In her own final hours, Joanne took great comfort in sharing with her husband and son 2nd Corinthians 4:7-18: "Struck down, but not destroyed... what is seen is temporary, but what is unseen is eternal."

In lieu of flowers, donations to a charity of your choice would be appreciated.