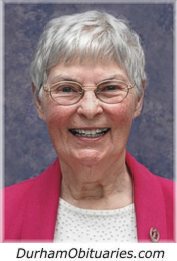 Sister Peggy was predeceased by her parents Francis A. Bach and her mother Margaret (nee Michel) Bach, her brothers James, Vincent (Bing) and Floyd Bach.

She is lovingly survived by her sister, Mary Lou Carroll and her brothers, Gerald and Edward Bach.

She will be sadly missed by her family members, her sisters in community and the many friends with whom she journeyed.

Sister Peggy was born on the Canadian Prairies in Hodgeville, Saskatchewan, where she grew up on a farm until her parents moved to Vancouver when Peggy was five years old.

In 1959, she pursued the teaching profession and taught at elementary schools in Ontario and British Columbia. Following a long career in teaching, Sister Peggy took further studies and obtained a Master's Degree in pastoral ministry from St. Paul's University in Ottawa.

Dedicated to pastoral ministry, Sister Peggy served generously and was well-loved for her joyful disposition in each place where she was missioned: Port McNeill, British Columbia, La Tabatiere, Quebec, and ministry to new immigrants in Vancouver. She volunteered for many years with the Becoming Neighbours program for new immigrants.

Sister Peggy was also involved in ministry to our Sisters at St. Joseph's Morrow Park Infirmary and at the Sisters' residence at 2 O'Connor Drive in Toronto. When Sister Peggy's health began to decline, she was admitted to the Care Centre, where she continued her ministry of prayer for the poor, the refugees and the Care of the Earth.

Sister Peggy will always be remembered for her quiet gentle nature and her beautiful smile.

There will be a private Mass of Christian Burial on Tuesday, August 4th, followed by a private Interment at Holy Cross Cemetery, Thornhill.

In lieu of flowers, donations may be made to Fontbonne Ministries, 101 Thorncliffe Park Drive, Toronto, ON M4H 1M2.